Photographing Americana: Signs and Structures of our Past: Chapter 3

The Anna Plaza Motel sign in Anna, Illinois is very much a “blast from the past”.  The actual age of the sign is unknown but based on the style and shape it is likely late 1940’s or early 1950’s.

Take note of the conveniences listed: Modern Electrically Heated (I assume that means the rooms) and TV.  Then as the times changed a sign was added at the bottom to include Cable TV with remote, water beds, and direct dial phones. 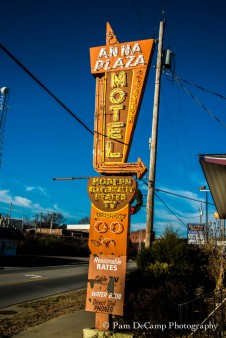 Think about what we consider modern conveniences today. Free wifi probably tops the list for most people. I remember traveling with my parents, we looked for places that had a pool; a heated pool was a bonus. We stayed in Ithaca, New York one summer and it was unseasonably cold. The motel said they had a heated outdoor pool, but after an evening swim I was as blue from the cold water as the guy in Big Fat Liar after his swim in the blue dye!

Think about having “direct dial phones” when the majority of the nation has cell phones. How times change. I found an article written in 2005 by someone who also photographed this sign. They said in their article that this sign probably would be gone soon. Here it is 10 years later and it still stands.

As for staying at the Anna Plaza Motel; no thanks! I am sure in the early days it was a very fine establishment. The town of Anna has many old structures and other interesting signs. I look forward to sharing those with you in the future.