MidWest BunFest: It’s All About The Bunny! 2015

One year ago my daughter adopted two bunnies, Smokey and Shadow.  They are both girl bunnies and had been purchased together.  The family who had them was having difficulty caring for them and were looking for a good home.  Libby had always wanted a bunny, so I thought, why not?  They go well with the rest of our menagerie!

A few months ago heard a squeal come out of the living room; “Mom, mom, I want to go to BunFest!”  Ok, what is BunFest?  The more we read about BunFest the more excited she became.  You can bring your bunnies; they have a spa; they can have a check-up; they can even get glamor shots!  Further research showed that BunFest was in its 5th year!  We must investigate this!

My idea of a “festival” or trade show is usually photography based.  When I enter the vendor area of a photography trade show, I get an adrenaline rush!  I assume rabbit people feel the same way about BunFest!  It was bustling with excitement and stories about how their bunnies were rescued and there was plenty of toys and bunny related trinkets to fill a shopping bag!

There were many rescue organizations represented at BunFest. They had catchy names; DARN (Dayton Area Rabbit Network) and EARS (Erie Area Rabbit Society).

I did not realize there was such a need for rabbit shelters, but I guess rabbits are much like other pets; people purchase them (likely seasonally) and then realize they don’t just take care of themselves and decide to get rid of them.  Rabbits require a lot of care and attention. Our rabbits live in a hutch outside. The hutch requires regular cleaning, the rabbits need toys to keep from being bored, and they need plenty of food, water, and hay.  Indoor bunnies need supervision to keep from chewing on electrical cords (because rabbits love to chew) and other objects that could cause injury to them.  They need cared for, brushing and they require regular exercise.  They can succumb to stress and have a heart attack.  During cold weather we move our rabbits into the heated garage to keep them from freezing. 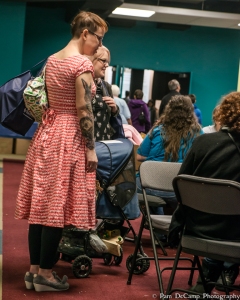 I particularly liked her bunny shoes!

I can’t remember this rabbit’s name, but they had Lucy, Desi, Ethel, and a cat named Fred! They had 4 bunnies with them.

This is a therapy bunny from F5RS (Frisky Ferrets, Fuzzies & Feathered Friends Rescue and Sanctuary); if she has her hat on, she’s working! http://www.facebook.com/F5RS1

Rabbit people come from all walks of life.  They are passionate about their furry companions. 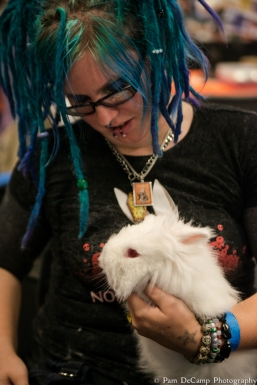 I noticed people gathering a round one of the booths.  There was a vendor who made clothing for rabbits.  She said she made a pattern and picks out different materials for the clothing.  Her website is AnnieElleBunnies.etsy.com. I think they looked adorable! 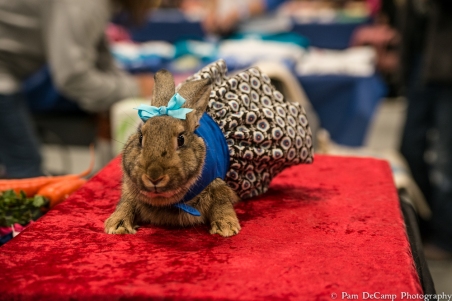 Dressing the bunny to show off her style!

I stood at one of the tables and watched Andrea Biggs of Breath of Life Illustrations (www.facebook.com/breathoflifeillustrations) sketch bunnies for the crowd.  She worked from photographs that were sent to her phone.  It took her only about 30 minutes to go from  the sketch to a full color rendition of the photograph of an individual’s beloved pet. 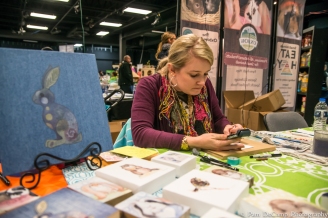 Andrea fills in the colors and the details.

She shows the finished print to the young customer.

The rabbits could go to the Chillaxazone to stretch their legs and relax and refresh.  There was plenty for a bunny to see and do while at BunFest! 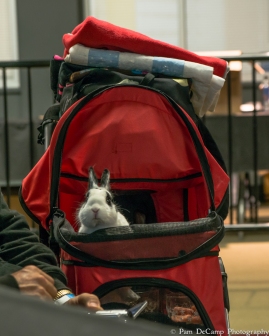 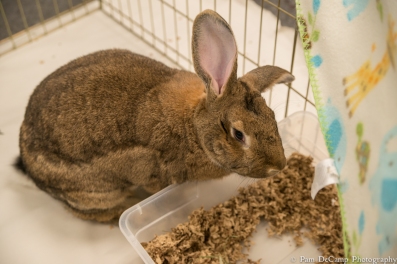 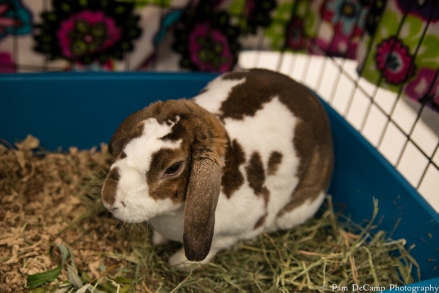 Our bunnies, Smokey and Shadow experience BunFest for the first time.  We borrowed a pet stroller from a friend of ours.  Having the stroller was very beneficial to transporting two bunnies around the event.  People would stop to pet them and talk about their bunnies. 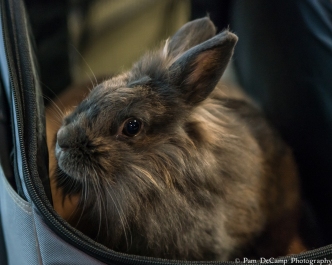 BunFest 2015 is an exciting event for rabbit owners.  You can purchase products such as toys, hay, habitats, and treats!  You can go to sessions on how to care for your bunnies and there was even one on how your bunny communicates!  The event is very worth while if you are in the market for a rabbit. For more information, website for BunFest is http://www.midwestbunfest.org 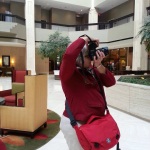 Typically when I post a blog I have a series of photographs to talk about, but today I am going to give the folks who do customer service for a living a pat on the back.

We hear so many times how terrible a customer service rep was or negative comments about companies. Sometimes, we, the customer, are as much to blame for the poor interaction on the other end of the phone. I know I’ve had those emotionally charged conversations with reps because the “thing-a-ma-jig” I bought broke after I used it once. There are companies out there who stand by the products they sell. I have three of those type of companies that I want to applaud for providing excellent customer service.

The first company I would like to applaud is Manfrotto (or Vitec Group Imaging Division). I love my Manfrotto tripod legs and the various heads I own (324RC2 and 468MGRC0, plus a couple of others). I purchased all of these items used and the 468MGRC0 did not have a user’s manual with it. I have had that head for a couple of years and had not used it because I primarily used that particular tripod for video and I had another tripod for my photography. As my equipment “matured” and became heavier, I figured it was time to start using the 468. For the most part it was very easy to use and to figure out, but I kept having difficulty with the tension and keeping it locked in place. I contacted Vitec/Manfrotto and asked them for assistance for the 468. I love using the on-line request forms so my customer service request was forwarded that way. Within a few hours I received a reply confirming they received my request and within 2 business days I had an electronic version of the user’s manual. I reviewed it and found out very quickly what I was doing wrong. To me this was a problem that was resolved quickly and efficiently. Again, if you are going to invest in equipment, go with quality.

The next company is Crumpler. Crumpler is one of those modern or “hip” companies. I was not familiar with them until I started searching for a computer bag and I became intrigued. Their style is very casual and they make a lot of messenger bag style cases. I then discovered their line of camera bags. They are very modern looking and don’t scream, “Hey, I’m a camera bag”! The names they give their bags are very humorus. I went with a Six Million Dollar Home that I purchased on eBay. It has plenty of pockets and room for what all I want to carry with me. I was tightening the clasp on it the other day and it broke. I was worried about calling for a replacement, since I had purchased it used, but when I called and told the lady what I needed she said, “No, problem, send us a picture of the clasp and we will mail one out to you, no charge”. That is a great way to stand by a product. No questions asked and fast turn around. I took a picture of it with my cell phone and emailed it and my contact information and they replied back right away saying they would send me the tracking information once it is in the mail.

The third company is Apple. I have had a couple of contacts with them during the last couple of months. The first contact was in January when my daughter’s iPhone 4S died…literally, died. I called and explained to them what troubleshooting steps I had already taken and then we attempted a full system reset that lasted for an hour. The lady on the phone, set-up a call back time and they were very prompt with calling back. The gentleman on the phone was courteous and very apologetic about the phone. He explained all of my options on replacement so I elected to mail the phone back to them for inspection and then go from there. I was supposed to remove the SIM card before mailing it back. However, the next morning I realized I had not removed the SIM card. I tried calling the automated line, but all I could get was the tracking information on the phone. I remembered, live chat. I got on my computer, which is a Mac by the way, and signed into the live chat. I reached a person (don’t know if they are young or old) named Jeremy. I explained to him my problem and he said he would see if they could intercept it as it came in and retrieve the SIM card. He asked me to hold a moment. He then came back on and apologized for taking so long and asked me to wait a while longer. I replied, “That’s ok I’ll just hum hold music while I wait”. In just a few moments he replied, “Great, as long as it is late ’90’s synthesized jazz.” I told him, “I love a customer service person with class and a sense of humor.” He fired back, “I’ll let you know if I find one!” I did get my SIM card back, too!

It does not take much to make a customer to feel human, even if it is a live chat or a comment system to request service. Recently, Apple has upgraded many of their software products including their operating system, Aperture (the photography editing software), Pages, Numbers, and Final Cut Pro X. I do a fair amount of video editing and have several videos I’ve put together over the last few years. I had just finished working on video and the new upgrades showed up on my system. I was at a stopping point so I decided to go ahead and upgrade everything. You never know what is going to happen when you upgrade. I had a client in and was going to show her what I had put together for her daughter’s audition video. I had already burned a copy, but for some reason I could not get it to play. I opened up Final Cut Pro and ALL of my projects were gone! I could find them on my hard drive, but I could not access them. All I could do was mutter, “Now, what?”

I contacted Apple, this time through their message board for Final Cut Pro and asked for their help to restore my files. I received an email within a couple of hours with links to their upgrade information FAQ’s. Since I had actually read through a few of them, I kind of knew what I was looking for. I found the topic that pertained to me and went in and followed the instructions and I was back up and running. I replied back to the email, his name was Noah, and I said, “Thanks! That worked! I am so glad I have a Mac”. Noah replied, “Right on- glad that helped.”

I think in this automated world that we’ve created we still desire to be treated as humans. Customer service does not have to be stressful to either party. I know occasionally, I try to have a sense of humor about things, just to break the tension of the moment. We all have the customer service horror stories, but we also need to embrace those positive moments when we feel we’ve made a connection on the human level.