Veterans Day stirs many emotions for me.  My father’s funeral was on November 11, 2011…yes, 11/11/11 (dad would have enjoyed the numbers).  This fall I took a trip to our Nation’s Capital and have written a previous blog about visiting Arlington National Cemetery.  Arlington is the ultimate homage to our veterans.  Many towns have veteran memorials to honor their fallen soldiers.

My family has had strong representation in the military; US Army, US Navy, and US Air Force.  I have had friends in all branches of the military.  I have a great admiration for those who chose to serve in the armed forces.  I seriously considered joining the Air Force in 1982; I had graduated college and was having difficulty finding employment as a photographer and had decided to pursue nursing as a career.  My friend Cathy had enlisted in the US Army and asked me to join with her.  I told her if I was going to go into the armed forces it would be the Air Force.  I ended up going back to nursing school and made the choice to stay in Cincinnati.  Over the years, I thought about the Reserves, but my biggest hesitation was basic training.  I hate running!  I never could run; I would try and that reported runner’s “high” never happened for me.  Basic training scared me, I dislike confrontation, I dislike yelling…so I decided I had better stick with the things I was good at.

My father always attended the High School Veterans Day assembly. The final year I attended with him (2010) was very memorable for me and it was always emotional for him.  The playing of taps always brought tears to his eyes, that day was no different, I was glad I was with him.

While en route to Washington DC, there was structure in the distance at the Quantico exit. On the sign it said National Marine Corps Museum.  I was in the center lane and made my way to the exit.

The roof of the building is a striking image against the landscape. I was excited to walk through the doors to see what was inside. 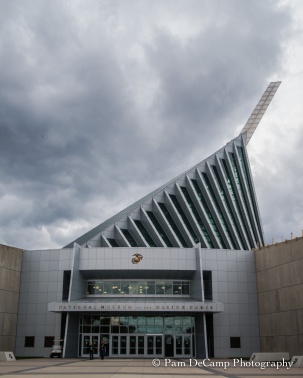 Many times I found myself in tears while reading the information in the displays.  There were 2 instances I took serious pause.  The first was when I was reading about a dog who had been trained to detect IED’s and how he died while riding in a vehicle that struck an IED in the road.  His handler donated all of the dog’s belongings to the museum. It was very touching.  The dog had saved many lives during his service detecting the same device that took his life in an accident.

The second time I took pause was when I was reading about Afghanistan.  In 2011, there was heavy combat, I had to read it more closely. My cousin Andy was stationed to a unit in Afghanistan during that time.  It was a very emotional moment for me. I realized, then, how people are changed in combat. I have great respect for individuals who choose this life. 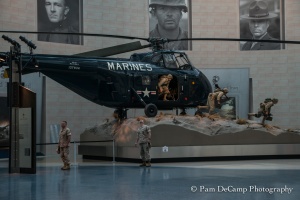 I marveled at the exhibits. What fascinated me was listening to people tell their “stories”.  One young man talked about a fellow soldier who had been injured in Afghanistan and how he was “somehow different” than what he was before the experience. One exhibit was a boat with the drop down at the end.  I heard older gentlemen talking about his experience in WWII.  He stood on the boat and recounted how an entire squadron was lost when the boat they were on landed on a sandbar and when when they stepped off in full gear they drowned.

My impression of the museum was if you are a soldier suffering from PTSD it would be a difficult journey though the museum.  The sound effects were realistic; the exhibits were graphic. The voices, the shells exploding, the visual stimulation of the exhibits put the visitor in the middle of the action. 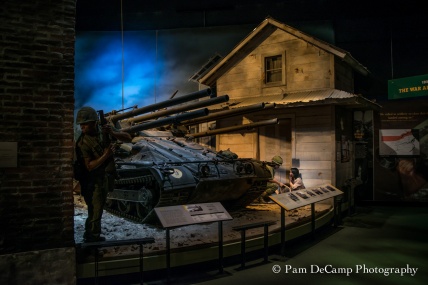 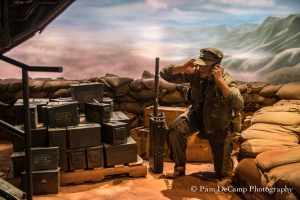 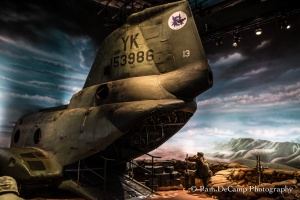 I enjoyed walking through the museum.  It transports you through time.  My favorite part was the firing range simulator.  For $5 you can fire a stripped down AK-47, that fires a laser simulated bullet at 300 yards.  I had to give it a try!  The high score that day was 95%; the big difference was no recoil; no kick. I held steady, I had one shot go outside of the center of the target…my score…85%.  I was thrilled!  I need to spend a little time on the firing range!

The museum was a stop worth taking.  In the almost 2 hours of time spent at the museum, I did not leave the first floor.  There was so much to see; all of the exhibits were a transport back in time. Over the years our country has been protected by young men and women who have barely adulthood.  They are given weapons and are trained to kill.  We do not always understand the physical battles.  The emotional battles these young men and women face and carry with them for the rest of their lives are at times terrifying. When I see someone in uniform, I take a moment to thank them for their service. Thank someone you know who has served our country.